We’re thrilled to offer a guest post from the esteemed Hank Shteamer, featuring excerpts from his recent interview with the great Richard Davis. Without further ado, take it away Hank….

Bass master Richard Davis turned 80 on April 15th, 2010. In celebration, my friend Russell Baker (a jazz expert as well as an outstanding trumpeter) and I are preparing a lengthy tribute program, which will air this coming Sunday, May 9, from 2pm to 7pm on WKCR, 89.9 FM, New York. You can tune in online here. We’ll survey Davis’s entire body of work and play excerpts from a telephone interview I conducted with him on April 25th, during which he discussed his collaborations with Booker Little, Bruce Springsteen, and Igor Stravinsky, among many other career highlights. NYC readers, take heed: Davis makes a rare East Coast appearance at Symphony Space on June 11 as part of Lisle Atkinson’s Neo Bass Ensemble.

As eccentric as those records are, the most unusual Davis date of them all might be Song for Wounded Knee, a trio session with guitarist Joe Beck (a veteran of Miles’s proto-fusion experiments such as “Circle in the Round”) and drummer Jack DeJohnette issued on Bob Thiele’s Flying Dutchman label in 1973. The music itself is almost totally spontaneous, frequently gripping and completely devoid of free-jazz cliché, sometimes verging on post-Captain Beefheart avant-rock and queasy free blues, as you can hear on “Agnewistic” above. What really makes the album unique, though, is its highly politicized presentation, evidenced by the title’s allusion to the Wounded Knee Incident and track names such as “The Rise and Fall of Tricky Dick.”

These days Davis, an esteemed professor at the University of Wisconsin-Madison, is as much a social activist as a musician, heading up both the Institute for the Healing of Racism and the Retention Action Project, among other similar initiatives. But as he admitted to me in our interview, when he entered the studio with Beck and DeJohnette back in ’73, he wasn’t yet aware of what Wounded Knee referred to. It’s not clear what Beck—who passed away in 2008—and DeJohnette knew of the Native American tragedy at the time, yet we can confirm that the album’s protest-music slant didn’t stem from them either.

As it turns out, the whole thing was Thiele’s idea. In the liner notes, the producer, already famous for his work at Impulse, breaks it down for Nat Hentoff:

I’m not, by temperament, the kind of person who marches in the street with a picket sign; but I do express my beliefs through many of my recordings—recordings which are, in a way, newspapers that keep on living.

This level of producer involvement in a record’s presentation couldn’t seem more foreign today. Listeners are well-acquainted with the idea of a producer leaving a sonic fingerprint—I’d bet that most readers of this blog could instantly conjure the sound of a Phil Spector or Bill Laswell production—but a political statement is something else entirely. Such a gesture couldn’t help but create an odd sort of tension: Davis’s name appeared on the record and he and the other musicians shared composer credit, yet the agitprop presentation was all Thiele’s. (Flying Dutchman had already issued several similarly pitched LPs, including journalist Pete Hamill’s Massacre at My Lai.) This circumstance serves as a reminder that recording dates in the classic sense were collaborations not just among musicians, but between artists and executives.

Fortunately, as Davis explains in the above excerpt from our interview, he was fully on board with Thiele’s ideology:

I was bowing the melody to “America the Beautiful”… and I made every note a wrong note on purpose… I was in a way attempting to say how unbeautiful or nonbeautiful America is.

The resulting performance (slyly titled “America the Beautiful?”) is as pure an artistic document of Vietnam-era malaise as you’re likely to find. Moreover, it demonstrates that Davis’s skills as an improviser extend far beyond the realm of music. Instead of handing Davis a score or a repertoire, Thiele furnished him with a concept, and the bassist ran with it. The scenario augments the already open-and-shut case for Davis as a consummate collaborator: Not only has he performed winningly in a huge array of styles—he’s also perfected the art of translating ideas into sound. 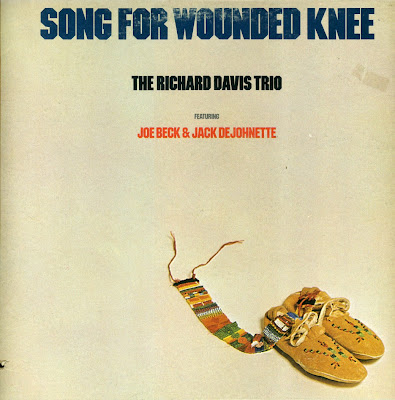