OUT OF THE BLUE
Robert Wyatt
Comicopera
Domino : 2007

CRAWLING
Mary Halvorson & Jessica Pavone
On and Off
Skirl : 2007

We’re honored to share this guest post by guitarist and composer Mary Halvorson, who just released Saturn Sings, one of our favorite albums of the year. The question of artistic influence is rarely as direct as many people let on; here Mary talks about how Robert Wyatt’s music has profoundly affected her own work — even if you can’t initially hear it. She’s picked some of her favorite Wyatt performances to share, as well as a track that she feels best demonstrates the indirect influence of his music on her own.

Whether you’re new to Robert Wyatt, Mary Halvorson, or both, there’s a lot of wonderful music to absorb here. Take it away, Mary–

People who hear my new record, Saturn Sings, might wonder what it has to do with Robert Wyatt. And rightly so– I think it’s safe to say that my music sounds almost nothing like Wyatt’s. That being said, there have been two occasions when, after a gig, I’ve been asked if I’m a Wyatt fan (shout out to Pete Galub and Bernard Lyons). Both astutely zoned in on some intangible element of my music that reminded them of Wyatt. All the years of listening to him must have seeped into my music somehow.

The first time I heard Robert Wyatt was in 2006 when a friend played me Rock Bottom (1974). I still remember the feeling of hearing the first track, “Sea Song.” I was sitting on my living room floor in front of the stereo. It was one of those rare moments when you are so completely bowled over by a piece of music that you don’t know what to think. I wasn’t even sure I liked it; I was just completely freaked out. The music was so beautiful, so strange, incredibly dark, and entirely unlike anything I’d heard. That’s what I love about Wyatt’s music. He’s not weird for the sake of being weird. The music is purely his own.

As I normally do when a record freaks me out that much, I listened to Rock Bottom probably six hundred times that year. That and a few other Wyatt albums. I barely listened to anything else. At one point I thought it would be a good idea to learn “Sea Song” on guitar and try my own version. Two hours later I had managed to suck the life out of it. Lesson learned– if a song is already perfect, no need to ruin it by creating an inferior rendition.

One thing I admire about Wyatt is that he didn’t just make a hit and ride it out for the rest of his life. He is a true artist who is always searching and continues to create new and interesting records today. A recent favorite is Comicopera (2007), an opera in three parts. Love songs turn into political songs which turn into songs with lyrics in Spanish and Italian. Wyatt has explained in interviews that he is so fed up with politics in England and the Western world- most recently with the war in Iraq- that he doesn’t want to associate himself with the English language. The album resonates with a feeling of being close to home while gradually lifting away from the world entirely, hence the name of the third act “Away With The Fairies.”

My next Robert Wyatt discovery took me back in time to one of his earliest projects. Before his paralysis in 1973, Wyatt was a drummer and vocalist in The Soft Machine. Check out their self-titled 1968 album, particularly the tracks “Hope for Happiness,” “Why Am I So Short?” and “A Certain Kind.” After listening to so much of Wyatt’s solo music, it was interesting to hear his earlier music with it’s strikingly brighter energy. I was of course not surprised to discover that I loved his drumming, too.

This brings me to another interesting point about Wyatt– he is known to be a huge jazz fan. Although his music would probably not be categorized as jazz, he has done some covers of standards which he colors with his unique energy and feel. I found a rendition of “‘Round Midnight” on a 1999 compilation called EPs, as well as a version of “How Insensitive” on Cuckooland (2003). Thinking about Wyatt’s connection to jazz made me wonder how his music relates to my own. In 2008 I mailed Wyatt On and Off, my duo CD with Jessica Pavone. He was nice enough to take the time to respond, which meant more to me than he realized: “I definitely sense a musical empathy- only the dialects differ, I’d say.” 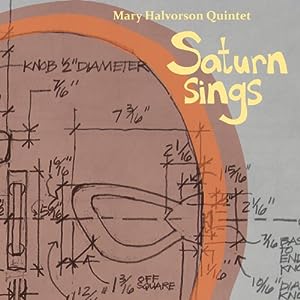 Be sure to check out Saturn Sings by the Mary Halvorson Quintet, released yesterday by Firehouse 12. The record is a stunning mix of tunes featuring her regular trio (John Hébert, bass; Ches Smith, drums), filled out by Jon Irabagon on alto and Jonathan Finlayson on trumpet. Halvorson has written some beautiful lines for the horns, a beauty that she then sets about marring, obscuring, reinforcing, and/or elbowing out of the way with her own wonderfully bent approach. Whether rocking rough chords (“Sea Seizure [No. 19]”) or finding a sourly melodic single line (“Cold Mirrors [No. 15]”), Halvorson’s guitar is never not interesting to listen to.

Mary has been popping up a lot lately, for good reason, and there’s much to see out and about:

–here’s the NPR First Listen write-up by Lars Gotrich; album no longer stream-able, alas
–here’s Jason Crane’s interview with Halvorson for his Jazz Session show
–here’s Jim Macnie on Mary, with some video footage to boot
–here’s a fine (if sloooow-loading) video, via Roulette TV, wherein Mary discusses the quintet, and we get to see the band in action (also an interview at Roulette from earlier this year)
–here are ten questions for Mary, with answers!
–and don’t forget maryhalvorson.com

Click the album cover above to buy the mp3 version of the album at Amazon.