We had such a wonderful experience at the previous D:O Loft/Lab show, we’re doing it again on Thursday with the Darius Jones Trio! Once again, the show will be held at at the fabulous Salt Space on 27th Street and Broadway in Manhattan. It’s a mere $10 to see one of the best bands in jazz today. So bring a friend!

“Led by the robustly creative alto saxophonist Darius Jones, this working trio expands on the ideals of post-1960s avant-garde jazz, with restlessness and rigor,” as Nate Chinen put it in the New York Times. Or, it could get down and dirrrrty, as we might put it.

To give you a sense of what’s to come, we’re pleased to be able to present a couple of live tracks from this band’s very first live show, from 2008. “Welcome to Earth” is a previously unreleased track that y’all can hear for the first time here! “Chaych” was a bonus track of sorts from Jones’ 2009 Man’ish Boy disc.

For more on both the tunes and the group, we got the straight scoop from Darius and the fine folks at AUM  Fidelity:

AUM/DJ on the band, now and then:

In 2008, Darius Jones started his working trio with bassist Adam Lane and drummer Jason Nazary as a way to explore improvisational concepts and to work on his own compositions. Having worked primarily as a sideman since arriving in NYC a few years earlier, Jones felt the need to create something of his own. Jones first met Lane on a gig with William Hooker, which is documented on Hooker’s album, Earth’s Orbit.

Jones and Nazary were brought together by Bob Moses, leading to a variety of subsequent projects including Little Women. Jones’ love for the sax trio and the connection he felt with both musicians inspired him to combine the three talents in a unique interpretation of the format.

Following the Trio’s performance at D:O’s Loft/Lab series on October 14th, they will be heading to the Pacific Northwest for Darius’ live debut way out West — Vancouver, BC, on October 22 and Seattle, WA, for the Earshot Jazz Festival on October 23.

Later in October, Darius will enter the studio to record a very special duo date with Matthew Shipp. The resulting album will be released on AUM Fidelity in early 2011. And not too long after that, the Darius Jones Trio will bring Darius’ new book of wicked tunes into the studio to record his next next album. 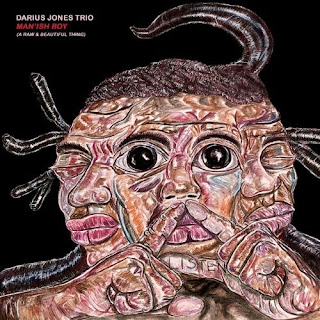 Darius Jones on the tracks:

“Welcome to Earth”
After two years, listening again to this — the first piece of the first concert of my working trio — all I have to say is, “Goddamn!”

We deal with so much music in this piece. We go from tonality to atonality to no-tonality — only sound. For me, this is everything. The music has grown so much, and to go back in time and hear the strength and rawness of what we were doing then, makes me so excited for the future.

“Chaych”
Many people have probably heard this piece as the hidden track on my debut record, Man’ish Boy (A Raw and Beautiful Thing). This tune led me to write that record, and to delve into my past growing up in the South. I felt I had to deal with that first before I could explore the music that my working trio is developing and performing now. “Chaych” is another way of saying “Church.”  This piece is my way of dealing with both the ugly and the beautiful aspects of my experience growing up in that environment. I feel like this performance captures the essence of that brilliantly. It was our first live performance ever, and in the church, spontaneity and living in the moment is a part of the energy that churns the spiritual and emotional climate of that culture.

For New Yorkers, we hope to see some of you at the show on Thursday. For everyone else, we hope you’ll dig these rare tunes by the Darius Jones Trio.