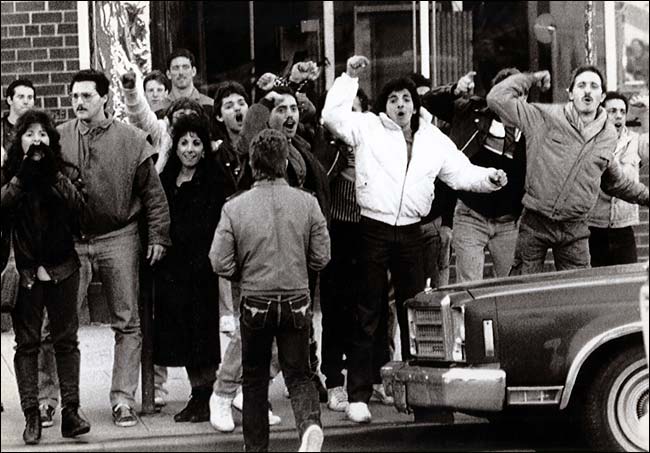 We’re writing this post in the aftermath of New York City’s latest racially charged judicial debacle. We were planning on posting something from Powertools anyhow, but the trio’s political tracks flared up with an added urgency. “Howard Beach Memoirs” revisits the infamous winter 1986 hate crime where a mob of racist Queens thugs assaulted three black men and killed one of them. Several defendants received light sentences and the rest were acquitted. The photo above immortalizes some charming Howard Beach locals shouting obscenities and epithets at civil rights leaders marching against racism.

“The President’s Nap” turns out to be an all-too-correct assessment of Reagan. But the phrase also applies to Prez Bush who continues to sleep his way through various national and international crises. Wonder what he dreams about? Perhaps because these two protest tunes don’t sport lyrics, they still sound ferocious and relevant. That’s also partly due to the finger-in-the-socket interactions between Jackson, Gibbs, and Frisell, which are never less than riveting. Witness the compelling lurches of “Howard Beach” as the trio builds to a blistering and unstable climax. It’s a shame this eccentric supergroup only made one studio album.

The aggro-sludge guitar attack on “Nap” also serves as a potent reminder of Bill Frisell’s heavy metal chops, and how he used to routinely scour the enamel off listeners’ teeth. (For more recent work in a heavy and metallic vein, check out Frisell’s contributions to Earth’s excellent “The Bee Made Honey in the Lion’s Skull” on Southern Lord.)

As for the occasionally hackneyed ’80s production effects and flourishes — you’ll have to listen past those. At least some things have been left behind.

8 Responses to The Racism Rhumba