Give the Drummer Some

Milford Graves
Meditation Among Us
Kitty : 1977

When Milford Graves was being honored with a special night at this year’s Vision Festival, back in June, we knew it was a must-see event. We also figured that Vision’s new home, the recently refurbished and relocated Roulette, in Brooklyn, would hold all comers, including us, and then some. No need to buy ahead!

Well, as those of you who might’ve been following our anguished tweets of that night already know, the event was filled to capacity before we even got there. And, really, we should have known: any night that features Milford Graves on the bandstand is going to be an event, and you’d best get your tickets as early as possible. Lesson learned.

Sort of. Coming a day or two late is this birthday post — Milford turned 72 on Tuesday, 20 August. (We seem to keep very bad time when it comes to Prof. Graves.) Better late than never, here’s a favorite track from the under-heard Meditation Among Us. It features a remarkable assemblage of Japanese jazz figures — including Kaoru Abe and Toshinoro Kondo — led by Milford.

The group recorded two side-long cuts in 1977, at a time when Graves was not really actively recording or releasing LPs. He had, by the mid-1970s, already started his teaching tenure at Bennington, while also beginning his research into healing methods and rhythms in the human body. We’re fortunate this fertile collaboration was captured on wax at all.

“Response,” ranges widely, beginning as a percussion workout spurred by Graves’ gripping ululations. Graves then moves to the piano for an open, searching episode, suggesting echoes of Alice Coltrane’s spiritual pursuits. Not surprisingly, Graves has a highly percussive approach to the piano, and gradually leads the horns to moments of abandon, before the concluding cool down. This is exactly the sort of meditation we can get behind — one that finds beauty in quiet moments as well as the storms life throws at us all. 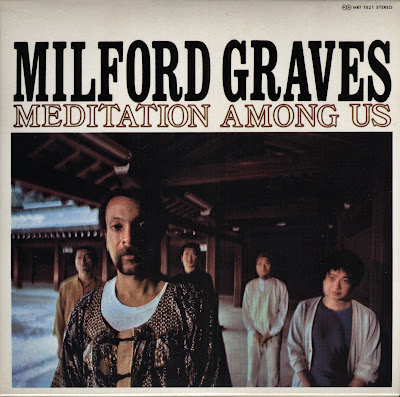