Where the Nuts Come From 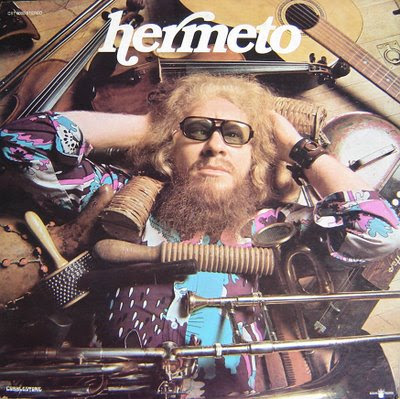 We’ve been struggling to get our heads around this album for some time. So rather than attempt a definitive response to the oddity that is Hermeto, Chilly and Drew decided to crack open a few beers, spin the album a few more times, and talk it over.

BEER #1:
Chilly Jay Chill: So what exactly is this album? It’s kozmigroov meets soft rock? World music mixed with cruise music? Just when you think it’s one thing, it becomes another.

Prof. Drew Le Drew: And just when you’re ready to fully embrace it, it turns icky. And just when you think it’s too saccharine, it takes some weirdly compelling left turn. And then back again.

DLD: It feels right on for many of the songs on the album, though not necessarily the ones we selected. Maybe this music is more… naïve?

CJC: I’m not so sure. Hermeto Pascoal’s got an impressive musical pedigree from his excellent work in Brazil’s Quarteto Novo in the late 60s. Plus he was in Miles Davis’s great early electric bands, contributing to Live-Evil and Jack Johnson. I mean, he must’ve known what he was after.

DLD: This was recorded close to his Miles tenure, but it’s something entirely other. It’s adventurous, it has elements of jazz, but… but…

DLD: Maybe Hermeto’s borrowing from what he picked up from Teo Macero. Some of the technicolor orchestrations feel like there’s the influence of Gil Evans in there too.

CJC: It feels very 1970s, but in ways that nobody else quite was.

DLD: There’s something singular about the way Hermeto combines the local (Brazil) with the Global (let’s say Miles and Teo and Gil). Even the Airto albums from this period aren’t as gonzo, or at least in quite the same ways.

CJC: I have to confess that the Pascoal I knew was for years simply based on staring at this image also which appears in the Jack Johnson set liners:

BEER #3:
DLD: The music on Hermeto is challenging but in ways that I’m not aren’t used to being challenged. At the level of taste – does all this really go together?

CJC: Robert Christgau once wrote that part of the genius of Aretha Franklin and Ray Charles was their lack of taste. He meant that they were willing to tackle any material – and in the process they could transform it.

DLD: But does that apply here?

CJC: I think it does. There’s a strain of Brazilian music that seems to prize beauty for beauty’s sake, that’s unabashedly sentimental and emotionally open. Or am I over-thinking this and what we’re hearing in, in fact, just cheezy in spots?

DLD: I’d say “Velorio” offers the most sustained and compelling weirdness on the album. It starts off as a moody Brazilian percussion workout; the piano doesn’t even come in until the 5 minute mark. Then there’s the sweeping strings and horns and Flora Purim’s vocals – and it becomes what? Some sort jazz tropicalia spy theme? Then an avant whirlwind? My head hurts. But in a good way. I need another beer.

CJC: Compelling weirdness is right. The mix of sounds is the most oddball aspect. This tune really stands out from the rest of the album too. We shouldn’t give folks the impression that this is the prevailing approach, because it’s not.

BEER #4:
CJC: “Guizos” is fascinating. It’s ethereal and haunting. Unusual synths and percussion and horn charts floating all around the vocals.

DLD: It’s also very unstable. You think it’s going to be a simply pretty tune, but instead its vaguely unnerving, like a low grade fever.

CJC: What’s crazy is how this subtly avant song eventually resolves into something so grandiose that it could be the climax of an episode of “The Love Boat.”  What the fuck.

CJC: We’ve been using the word “weird” a lot here.

DLD: Maybe we need something stronger than beer to truly appreciate this music.

BEER (OR SOMETHING) #5:
DLD: Dude, I gotta say, the album cover tells you what you’re in for – and it delivers in spades.

DLD: Right, but here’s the thing – is this album, like, actually good?

CJC: Yes? No? Maybe Hermeto is beyond mere good and evil.